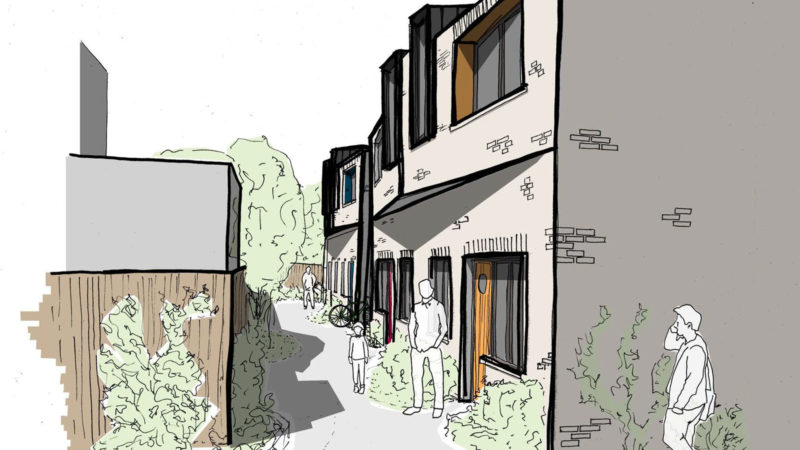 Laura, our new coordinator at CLH London, recently caught up with Ameen Lilani of Zahra Housing Co-op to learn about his journey to create purpose-built homes for his community in Harrow.

Priced out of his own community

“My story,” Ameen begins, “is the same as millions of people in the UK.”

He tells me that despite working hard and taking part in his community, he has found it impossible to get his foot on the property ladder in London.

“I’ve been evicted several times,” he explains. “Not because I didn’t pay the rent, but usually because the landlord wanted to sell up.”

“The last time I was evicted, my family and I ended up living in a hotel room for a month. It was the worst experience of our lives.”

As a father and husband, Ameen wants nothing more than to escape the renting cycle, to plant roots in London and offer some stability to his family.

But knowing that buying privately or through shared ownership would be almost impossible for him, he decided to look elsewhere. That was when he came across community led housing.

In 2017, Harrow Council and the Mayor of London began to explore innovative ways of helping local people build their own homes.

The initiative went largely unnoticed at the time – some people thought it was too good to be true – but fleet-footed Ameen decided to act right away. He approached Harrow Council to ask for information.

“I went to a few meetings and workshops with them,” he explains, “and got to meet other people who were interested in the idea.” Ameen would go on to start a community organisation with some of these people, which they called Zahra Housing.

Their next step was to secure funding – but in order to do that, they first needed to raise their profile.

Ameen reached out to the Confederation of Cooperative Housing to find out what Zahra needed to do to access funding.

“They told me the best way to get started was to turn our community into a non-profit co-operative,” he says. “This would help us to stand out when we approached Harrow Council.”

This proved to be a vital step. When Zahra Housing Co-op approached Harrow Council for funding in 2017, they were offered a start-up grant to help them find a plot of land.

But in Ameen’s own words, “we still didn’t really know what we were doing at the time.”

Fortunately for him, the next time he reached out for help and advice, a new entity had appeared on the scene: Community Led Housing London (CLH London).

When the team first met Zahra Housing Co-op, they were already well on their way. The team helped by providing the advice they needed to take things to the next level.

Explaining how CLH London got involved, Ameen tells me they “helped give us structure.”

“With their experience in housing, they were able to tell us what we needed to do in simple terms. All we had to do was follow their advice.”

Our Project Director, Lev helped Zahra Housing Co-op create their first tender and identify a number of suitable architects to send it to.

Then, Senior Project Adviser, Gemma helped the community create a brochure, which they later gave to Harrow Council. It outlined the community’s plan to build three homes on a brownfield site and included drawings designed by an architect.

This brochure helped convince the council to support Zahra Housing Co-op’s project and it wasn’t long before they were able to enter pre-planning. They were then able to achieve an agreement in principle from a finance provider to fund construction.

“CLH London told us what to do and we did it,” Ameen explains. “Without their help, we’d have been lost. It’s not an easy project, which is why you need expert advice – and that’s where CLH London came in.”

With plans and funding begining to fall into place, Zahra Housing Co-op will soon be looking to build their homes.

After years of trying to purchase his own home in his local borough, Ameen admits to feeling a little overwhelmed.

“Harrow means family to me. Harrow means community. I’m excited to finally be able to plant roots here,” he says.

“And I have nothing but positive things to say about Community Led Housing London. If it wasn’t for them, this project wouldn’t have happened.”

I ask Ameen what advice he would give to other people wishing to get started with community led housing.

“Start with your own community,” he says. “Find other people in the same boat as you.

“Then make sure you learn the skills and knowledge you will need down the line. You’ll learn as you go with CLH London’s help. Go to their workshops and immerse yourself in the world of co-operative housing.”

The final question I ask Ameen is: have you enjoyed it?

“Housing in London has got to change. It’s become a profit-making commodity and spiralled out of control. This is why we’re committed to making our cooperative not-for-profit. We’re trying to make a real difference.”

Zahra Housing Co-op now believe they are less than two years away from moving into their own community-built home in Harrow.

“This is something we never thought we could do and we’ve gained lots of knowledge along the way,” Ameen says. “And we couldn’t have done it without Community Led Housing London.”