Rowan, one of our senior advisors, recently caught up with members of London Older Lesbian Cohousing (LOLC) to hear how they came by cohousing and their plans to build a 25-home scheme in East London.

Like many communities building homes with Community Led Housing London, LOLC started as little more than an idea. 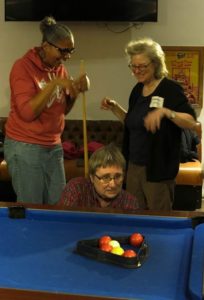 “I was chatting with friends about how we wanted to live as we got older,” explains Jude Watson, who has been with the group since its institution in 2016. “We all agreed we didn’t want to be living alone in our old age – we wanted to be with like-minded people from our own community.”

Jude tells me how, in old age, lesbian women are less likely to have children and more likely to be single, which can make it harder for them to get the care and support they need.

“Being older and lesbian adds an extra element to life in old age,” she says.

That’s why Jude and her friends decided to start LOLC – to create a “community with intent” and live alongside people with shared interests and ideas.

“We are all Londoners”

Opening Doors London estimates there to be 100,000 older LGBT people living in London. However, the city has limited housing options to support this community in old age.

Even so, there was never any question about where LOLC wanted to establish its home.

“We’re all Londoners,” Jude explains. “Most of the women in our group were either born in London or moved here long ago. We’re from all over London, and we want to stay here.” 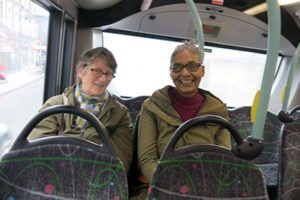 Cathie Sutton, who joined LOLC in 2017, has been in London for most of her life and can think of no other place she’d rather live. “I love it here,” she says, “even though it can be a difficult city to live in.”

When LOLC is completed, it will become London’s first purpose-built all-LBGT cohousing community, creating a unique and valuable resource for generations of older lesbians to come. 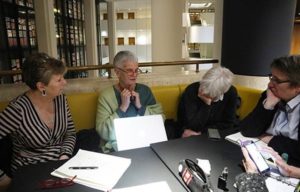 As Jude puts it, this will allow everyone at LOLC to live “freely and authentically” in their old age.

“Living this way,” she adds, “has been shown to have many benefits, both mentally and physically.”

When Community Led Housing London hosted its first workshop in 2017, LOLC was one of the groups in the room at the time.

Jude was at that session. She remembers being introduced to all sorts of people, including representatives from housing associations, London borough councils and many different advisors.

“If they hadn’t been there that day, I don’t think we’d be where we are now,” she tells me.

What is Community Led Housing London? We’re a resource and advice hub that helps communities meet experts, learn new skills and get their projects off the ground.

We teach groups how to do things like create policies and procedures, apply for funding and finance and find and bid on a site. We host regular training workshops where you can meet potential partners and other community groups looking to build new homes.

For Jude, that first session was a chance to recruit a consultant who had experience working on a similar project.

“CLH London have supported us ever since that first session,” Jude continues. “That’s taken some of the pressure off, which has allowed us to focus on building our community.”

The first steps towards cohousing

Over the following years, LOLC continued to work closely with Community Led Housing London. We put them in touch with consultants, advised them on how to become a limited company and helped them to seek funding.

“Creating a cohousing community can take ages,” Jude says. “But thanks to CLH London’s support and guidance, we were put in touch with the right people to help us through those processes. It really sped everything up.” 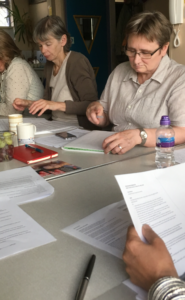 “And with the funding we received, we were able to host our own workshops with experts,” Jude tells me. “We even hired a mentor who had experience with other community led housing projects.”

A place to call home

Identifying a site was another major milestone we helped LOLC to achieve.

One of their key criteria was to find a site close to an urban centre in East London. As Jude explains, LOLC members see themselves as urban dwellers. For this reason, they have had to pass on a number of sites, including some in rural areas.

But, shortly before the coronavirus pandemic, the group identified a site in Walthamstow and are working with a London housing association to appoint architects and develop concepts for their new home.

“Working with Community Led Housing London really helped us to reach this stage quicker than we thought we would,” Jude says.

Both Jude and Cathie are growing ever more excited as they move ever closer to laying the foundations of their new home – though they acknowledge the project is still several years off completion.

Nonetheless, they feel confident thanks to the support Community Led Housing London has to offer.

How to get started

Community Led Housing London continues to offer free support for anyone interested in starting their own housing project.

“I think it’s really good idea,” says Jude. “And really empowering. It’s people doing it for themselves. And having a resource like CLH London really enables that.”

If you’re looking to kick off your own cohousing project in London, get in touch to find out everything you need to get started.

As Cathie puts it: “To live healthier happier lives, community led housing is the way forward. I would definitely encourage it – it’s hard work, but it will lead to a healthier, happier, kinder community.”