We caught up with Sanya Polescuk – NW3 CLT founder and director, to find out where the idea for the CLT was born, how Sanya has nurtured the group to grow a membership of over 150 and the stage they are at now, after an impressive six years of activity.

As a long-time resident of the lively neighbourhood of Hampstead in Camden, Sanya began to feel a sense of frustration at the apparent depletion of a mixed community in the area in which she lived. Because of the high land values in the area, previously affordable and public property was often sold to the high bidder, meaning that new residents to the borough could only be of a certain income bracket, making it increasingly difficult for many people to find affordable and secure housing in the area.

“I didn’t used to know anything about the term Community Land Trust (CLT) before this, I just wanted to talk about what was happening around me to as many people as I could. It wasn’t until I ran into someone in 2014 who told me about this process that the group started to take shape.”

At this time, Community Led Housing London had not been formed yet, and so the group used the National CLT Network to learn about the process. Three initial members: Sanya, a local councillor, and a local friend (who later became NW3 directors) went on a mission – airing their concerns and what they thought could be done to solve them.

“We knew we were quite an anomaly at the time because the ‘CLT’ term tended to imply rural land held in a trust for the community. East London CLT was the only urban CLT that I had heard of up until this point, but their area and issues were somewhat different from ours.

“We soon realised we needed to become more of a solid organisation. We set up our website, spoke to a local lawyer, who helped us with incorporating a Community Benefit Society, became FCA approved and set up a bank account. I made sure we were looking at other existing models, made known to us by the National CLT Network and we began to adjust and adapt these for our needs.”

NW3 CLT currently have a membership of over 150. They grew membership by creating action in the community – telling people locally about what was happening with the housing supply surrounding them and encouraging them to act too. Sanya made sure they were alerted to all planning applications and sales in the borough – always on the lookout for their first site.

“When CLH London was created, we’d already been making noise for nearly three years – and by this point we had already met with Camden Council and had over 50 members. We needed people who wouldn’t stop at the hurdles, who would keep pushing for what they believed in, and that’s what we got! 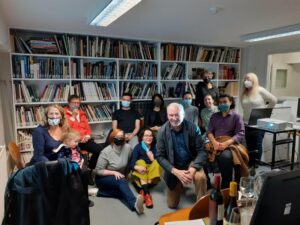 “Our aim was to make it easy for people to join, membership was cheap, registered, and legitimate – so why not join? It’s great to have the noise and volume at first, and then it becomes clear who has the time and expertise to really get involved day to day.”

Alongside campaigning against public assets being sold off to the highest bidder, the CLT had also attempted to prepare development proposals for these sites. However, they were too large and too complex for “a first-timer like us” to be given a chance. CLH London highlighted that this presented a confusing picture to potential partners. The group saw an opportunity with a small council block, devastated by a controversial fire, and discussed it with the hub. This was seen as a manageable size and with a clear logic of the added value of community led development. The CLH London team guided NW3 to put a business plan together including financial modelling to illustrate the need and increased capacity through community-led housing development on this site. Once this was created, they could go to the council and present a real solution.

“We showed the council that we can make noise, but also be productive and set out real steps for the process. We told them we could provide a whole rainbow of tenures, to safeguard the diversity of the area.”

31 Daleham Gardens, which had been vacant since November 2017, became the first plot for the group – who have visions of creating around 14 environmentally-friendly homes, of which well over half would be genuinely affordable and for existing residents and workers of NW3.

“Camden Cabinet voted unanimously to sell 31 Daleham to a CLT, and later requested evidence of organisational capacity to deliver housing for the local community through an open Expression of Interest, and we were accepted as the Council’s development partners.”

The group chose Mole Architects for the scheme and their designs to Passivhaus standard will be surrounded by green, outdoor community and play space. Profits will be invested back into the scheme, helping to improve the affordability and quality of the homes. The current projection is that the homes could be completed in early 2025.

“Camden says it’s a ‘pioneering exemplar’ project – and we hope we have invented the wheel for more. As valuable as the Community Housing Fund was, the support from the CLH team was arguably just as important. Just knowing that we have that behind us and their presence at our meetings, is invaluable. We are steered in our development and management, and there is a direct voice of reason.

“Where do you go next? How do you engage? Who should you talk to and how do you manage those relationships? These questions were ever present and that’s where CLH London’s advice really comes in.”

The group receive continuous positive feedback from the Council, and they are being encouraged to investigate more small sites in the area to potentially develop more housing.

“This project is not the end! If anyone is thinking of following in our footsteps, I encourage you to reach out to CLH London, and if you’re not in London, the CLT Network, nationally. They were an incredible help. Once you’re in this incredible network, you can follow the path of others and we are always happy to share our experiences and pitfalls!”

Keep up to date through the NW3 CLT website.

Rising Sun Housing Co-operative was formed by a group of artists who need investment to finalise the purchase of the former pub they live and work in from the landlord who recently put it on the market.

The building is used as both a home and workspace. It contains facilities such as a recording studio, rehearsal space, intimate venue and design studio which members of the community are allowed to use free of charge. On top of this, it provides crucial and increasingly rare affordable housing and a space for young creatives to build networks and meet other like-minded people. In short, The Rising Sun is a hub for all manner of creative outputs and a staple part of the local art and music culture.

We have helped to commission financial modelling and business planning, which has helped the co-op secure mortgages in principle, and prepare their loan stock offer. We have been directly involved in negotiating with the landowner and agents during to get their offer accepted, and bringing solicitors on board, and there has also been a little architectural input on internal reconfigurations to make better use of the space, and improve the building’s environmental performance.

They are now looking for investors to raise £230,000 with attractive rates of interest, or they will lose the space for good.

Bonny Downs Cohousing Project was initiated by a local charity seeking to redevelop their church hall.

The redeveloped church hall will combine intentional community housing with a wider community space on the ground floor which will be used for services for people who are homeless, vulnerably housed or experiencing food poverty.

In this video, we head over to Bonny Downs church to find out how their project is progressing.

Initiated by housing activists in the late sixties, the co-operative is now home to 125 tenant-members living in 14 houses and a block of flats.

We caught up with Matina and Marie from Sanford as they discuss their cooperative’s plans to expand and build a new community space.

Formed by a group of single parents during experiences in temporary accommodation, the main aim of Heads2Gether Housing Co-operative is to provide safe, secure, and affordable homes for single parents on low incomes.

With plans to live as a cohousing community, they are also looking to establish a community childcare system as well as safe community spaces for their children to play.

In this video, we catch up with Lorraine and Jessica from Heads2gether as they explain the motivations behind and future aspirations of their community led housing project.